If members of Congress don’t understand the nation’s deficit and debt problem – and they’re the ones who have to do something about it – can the media and public be expected to?

Maya MacGuineas, president of the Committee for a Responsible Federal Budget, gave National Press Foundation Paul Miller fellows a tutorial on the federal budget process, and offered strategies for understanding the size and scope of the national debt.

MacGuineas (bio, Twitter) also assured the journalists that there were no dumb questions when it came to understanding the topic. Members of Congress she often briefs don’t know many of the basic concepts, either. They also don’t grasp why they – or the public – should care about the nation’s growing debt.

The annual budget deficit topped $1 trillion in the aftermath of the 2007-2009 Great Recession but then started dropping. By 2016, it was rising again, and it is on pace to hit $1 trillion again. With it, the national debt – the accumulation of all those yearly deficits – will continue to rise to unhealthy levels.

MacGuineas discussed the numbers and also how reporters can make these trillion-dollar abstractions relevant to readers. She also talked about reliable resources journalists can tap, starting with the Congressional Budget Office and its budget projections. 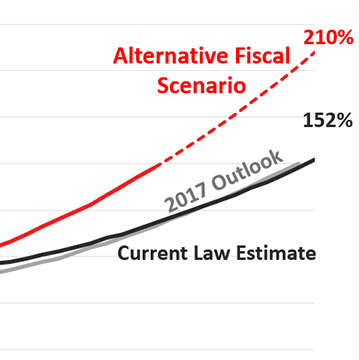