NPF StudioWorks is conveniently located in downtown DC between the Dupont Circle and Farragut North metro stations. We offer one-stop-shopping for your video needs. Our prices are budget-friendly. Our staff is experienced and efficient.

We’re in a revolutionary era of communications. Video is no longer a luxury, it is essential. A few facts:

Fact 2. One-third of all online activity is spent watching video.

NPF StudioWorks capabilities include: live streaming services, green screen and chromakeying, teleprompter, 12 channel audio board, 3 camera HD production and flexible design within the 20x20 studio. A detailed equipment list can be found below.

These are just two examples of video content the National Press Foundation has produced within the StudioWorks environment. 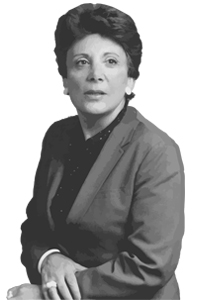 With a generous grant from Evelyn Y. Davis and The Evelyn Y. Davis Foundation, the National Press Foundation built a state-of-the-art broadcast studio in 2014. We are producing interesting, engaging, dynamic content including 5-minute interviews with subject experts, hour-long webinars, testimonial videos, and more. This content can be found throughout our website.

Evelyn Y. Davis was a philanthropist, successful investor and financial skeptic who has been a national leader in calling for accountability on behalf of publicly owned companies. She published the nationally known publication “HIGHLIGHTS AND LOWLIGHTS” from 1965-2011. The newsletter covered corporate governance, executive compensation, location and dates of meetings, as well as the issues and votes on numerous shareholder proposals.

Evelyn Y. Davis was born in Amsterdam, the Netherlands and came with her father and brother to Baltimore where her father, a distinguished neurologist, taught at Johns Hopkins University. She attended George Washington University before beginning her legendary investing career.

Evelyn Y. Davis attended her first stockholders’ meeting in 1959. She is a shareholder in some 80 corporations in diverse industries. She has lectured on corporate governance issues at Babson College, Northwestern University’s Medill School of Journalism, the Darden School of Business at the University of Virginia, Penn State’s School of Journalism and many other venues.