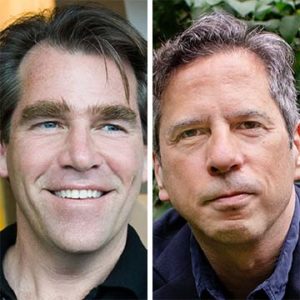 Charles Sennott and Steven Waldman, co-founders of Report for America, an initiative to strengthen local journalism, have been selected for the National Press Foundation’s Chairman’s Citation.

The two veteran reporters will be honored at NPF’s annual journalism awards dinner on Thursday, Feb. 13, in Washington, D.C.

Report for America was created in 2017 to strengthen community journalism at a time when local newsrooms have been decimated. The initiative currently supports more than 50 journalists in newsrooms in 28 states and expects to have some 250 reporters placed in 165 newsrooms by the middle of this year.

“At a time when good journalism is under siege, Report for America is providing a much-needed boost to bring quality journalism to areas where local reporting has collapsed,” said Kathy Gest, chairman of NPF. “This program strengthens democracy by providing the kind of factual, in-depth information that people need to make informed decisions.”

Steven Waldman, president and co-founder of Report for America, said, “We’re so grateful for this award because it recognizes two important truths: the crisis in local news is a threat to democracy, and we need to embrace dramatic new approaches to solve it. Specifically we need to treat local reporting as a public service profession.”

“We are deeply honored by this recognition for Report for America, and the work of our whole team,” said Charles Sennott, CEO and editor-in-chief of The GroundTruth Project, which launched Report for America. “We believe the crisis in journalism has everything to do with the crisis in our democracy, and we hope this award might bring attention to our efforts do whatever it takes to restore journalism from the ground up.”

Waldman has been a journalist at Newsweek, U.S. News & World Report and the Washington Monthly, created Belief.net, and was an advisor to the Federal Communications Commission. Sennott was a reporter and editor for the New York Daily News and a longtime foreign correspondent for the Boston Globe before co-founding GlobalPost and The GroundTruth Project, which supports emerging journalists covering under-served areas in the U.S. and around the world.

The Chairman’s Citation, created in 1996, confers recognition on individuals whose accomplishments fall outside the traditional categories of excellence. The list of past awardees is here. Recent winners include Elisabeth Bumiller of The New York Times, Sally Jenkins of The Washington Post and the late Steve Buttry for digital innovation.

The National Press Foundation is an independent nonprofit that is run by and for journalists. NPF’s sole mission is to educate journalists about today’s most pressing issues and provide critical toolbox training.

For more information about the NPF dinner where Sennott and Waldman will receive the Chairman’s Citation, contact Jenny Ash-Maher at jenny@nationalpress.org.