Nuro won government approval to run a low-speed autonomous vehicle to deliver groceries and pizza to your doorstep. Waymo, the self-driving car service designed by Google, is up and running in Phoenix. Pittsburgh has seen a swarm of companies test-driving AVs.

These are just a few examples in an increasingly busy space. Some 80 companies are testing hundreds of self-driving vehicles in the U.S. in a mashup of high-tech companies and traditional automakers.

Companies have been predicting for years that self-driving vehicles are just around the corner. But so far, it largely hasn’t happened. Instead, the self-driving dream has hit roadblock after roadblock:  sluggish efforts in Congress to provide a framework for rules and regulations; inertia at the Department of Transportation while awaiting that framework; and a squabble over connectivity for a product that will be the poster child for the internet of things. 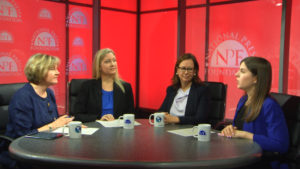 Catherine McCullough, executive director of the Intelligent Car Coalition, explained the five levels of automation as defined by the federal government. At level zero, the human driver does everything. At level five, the vehicle can perform all driving tasks under all conditions. Level five is the holy grail for autonomous vehicles – and still not achieved.

AVs will be regulated by the National Highway Traffic Safety Administration, a branch of the Department of Transportation. Courtney Rozen, a reporter for Bloomberg Government, covers NHTSA and Congress. NHTSA has issued four versions of its blueprint for self-driving cars while awaiting congressional action. Rozen and McCullough both said it seemed unlikely Congress would act in 2020 because the House and Senate remain at odds on critical issues like liability in case of an accident and because it is an election year when little gets done.

The stasis puts U.S. players at a disadvantage. McCullough said nations with centralized governments, like China, have an opportunity to plow ahead. Other countries with an upper hand include the Netherlands, Singapore and Norway.

Kelly Donohue, a lawyer at Wilkinson Barker Knauer, described an underreported aspect of AVs: the spectrum issue. The Federal Communications Commission 20 years ago set aside a band of 5.9 GHz spectrum to connect vehicles for applications like navigation, infotainment and roadside assistance. But advocates for AVs are lobbying the FCC to allocate more spectrum for so-called “cellular vehicle-to-everything” technology, shorthanded as C-V2X. China and the European Union are headed in this direction.

The FCC proposal is in the public comment phase into April. Reporters can follow the proceedings here.

Support for this webinar is provided by Honda North America. NPF retains sole responsibility for programming and content.