It’s also a condition that has been regularly treated by invasive cardiac procedures: stents to open up blocked arteries or bypass surgeries.

But what if the thinking behind that treatment regimen was flawed? That was the focus of ISCHEMIA, a large, federally funded study that called into question much of established medical practice. Its initial findings were major medical news in 2019. 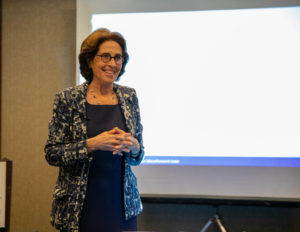 In a session with National Press Foundation fellows, Dr. Judith Hochman of NYU Langone Health offered the ISCHEMIA trial as a case study in how big science is conducted. It also showed how medical practice can change over time as new research emerges – although it doesn’t happen quickly.

“It takes a long time to change practices,” Hochman said. “It takes years.”

Ischemic heart disease happens when clogged coronary arteries deprive the heart of oxygen, possibly leading to  chest pain when extra demands are put on the heart, such as during exercise or stress.

Funded by the National Heart, Lung and Blood institute of the National Institutes of Health, ISCHEMIA asked a fairly simple question: Should a patient with a significantly abnormal stress test be managed with medicines and lifestyle changes and considered for an angiogram, stents or surgery – or should have those invasive procedures right away?

ISCHEMIA, which began in 2009, was conducted at 320 sites in 37 countries. Hochman detailed the lengthy process to get federal approval and funds– and coordinate such a massive, multicenter study . It eventually enrolled and randomized 5,179 people and split them into two groups: stents and surgery, or medicine and lifestyle.

The study basically found no difference between the two groups. Hochman described the complicated statistical analyses that support the findings. Bottom line: Patients who received medications alone did not have more heart attacks or die more often than those who underwent the invasive procedures – essentially undercutting much of conventional medical practices.

“No matter how you look at it, there is no statistical difference,” she said.