When it comes to heart disease, Americans have become complacent.

“We have gotten used to our friends, family members and co-workers succumbing to cardiovascular disease,” said Dr. Laurence Sperling. “We can’t accept that.”

One-third of American deaths are related to heart disease, Sperling said – but only a tiny fraction of the conversation on heath is related to it. In his role as executive director of the federal government’s Million Hearts initiative, Sperling aims to change that.

Million Hearts is a joint program of the Centers for Disease Control and Prevention and the Centers for Medicare and Medicaid Services. Sperling has also had a long career at the Emory University School of Medicine and its Emory Center for Heart Disease Prevention Center. 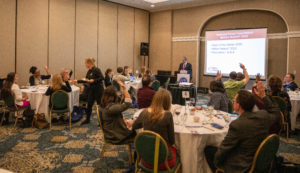 In a session with National Press Foundation fellows, Sperling described the goals of Million Hearts (website, Twitter) and gave an overview of heart health in America. It’s a medical issue that for years showed rapid improvement, but then stalled.

“It’s a reality check,” he said of an uptick in cardiovascular events in the past decade.

Overall, more than 1.5 million people in the U.S. suffer from heart attacks and strokes per year, and there are more than 800,000 deaths per year from cardiovascular disease. It’s also the greatest contributor to racial disparities in life expectancy.

He told about metropolitan Atlanta, where the life expectancy in one area is 84 and just 15 miles away it’s only 64. “We’re not talking about sub-Saharan Africa here,” he said. “We’re talking about a city in the U.S., and a city in which I live.”

There was a dramatic drop in deaths from cardiovascular diseases from the 1950s to the 2010s – from 800 per 100,000 people to about 200. But obesity and other heart-unhealthy lifestyles have conspired to arrest that improvement.

Sperling said that among the millions of “missed opportunities” to prevent cardiovascular events are 9 million people not taking aspirin as recommended, 40 million people with uncontrolled high blood pressure, 39 million not using statins when indicated, 54 million smoking and 71 million who are physically inactive.