As Americans’ waistlines have expanded, so have the risks to their sleeping patterns and their hearts.

If you get less sleep, you’re more likely to be obese. And if you’re obese, you have a higher risk of heart disease, said Dr. Virend Somers of the Mayo Clinic in Rochester, Minnesota.

In a session with National Press Foundation fellows, Somers – a cardiologist who directs the cardiovascular facility and the sleep facility within Mayo’s Center for Clinical and Translational Science – highlighted the nation’s alarming obesity trends. 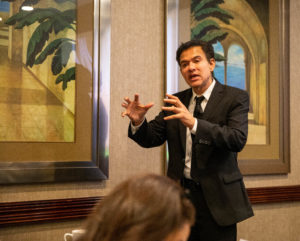 State-by-state, America is getting fatter. In the 1990s, no state had more than 25% of its population in the category of obese (a 5-foot, 4-inch person who is 30 pounds overweight).

At the same time, more people are losing sleep at night. That’s partly due to those midnight tweets and Facebook posts. But there’s also a connection to obesity: As weight goes up, the likelihood of obstructive sleep apnea – interrupted or difficult breathing – goes up as well. That means less sleep for both the person and the spouse.

All of this has an impact on heart disease. Somers described one study that found sleep duration of five hours or less was associated with a two-fold increase in risk of hypertension.

Somers also touched on the strengths and weaknesses of the commonly-cited body mass index (BMI) measurement, as well as the connection between “normal weight obesity” – those who have normal BMI but a high body-fat content – and cardiac disease.