As the nation starts to lose its battle against heart disease, researchers at the University of Miami Miller School of Medicine are looking for ways to understand why – and how to reverse those discouraging trends.

From using stem cells for regenerating heart tissue, to understanding atrial fibrillation, to examining the specific concerns for Hispanic patients, the Miami physicians shared a range of their research with National Press Foundation fellows. 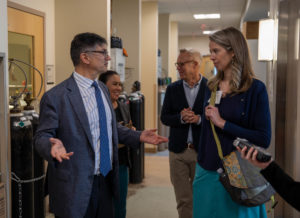 Dr. Jeffrey Goldberger, chief of the cardiovascular division, reviewed the latest thinking on atrial fibrillation, an irregular heartbeat that can lead to blood clots, stroke or heart failure. It’s a common condition: The lifetime risk for developing it is about 25% once you reach age 40; it’s responsible for 15% of strokes in the U.S.

Goldberger discussed a trial underway at the University of Miami to examine whether taking the drug liraglutide will reduce fatty tissue around the heart muscle and help ease AFib. He also pointed to one of the most effect ways to eliminate AFib: losing weight. “The more weight you lose, the better your outcomes from atrial fibrillation.”

Dr. Mauricio Cohen gave an overview of the special cardiac issues faced by Hispanics in America. Noting that Hispanics are now the largest minority group in the U.S., he said they are generally as aware of high blood pressure as other racial or demographic groups but are less likely to have it treated or controlled. 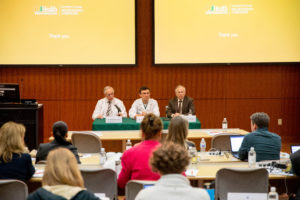 Dr. Robert Myerburg, a professor medicine and physiology, talked through the emotional issue of sudden cardiac death for athletes – often young, in high school or college – and the screening tools that might help prevent it. “The largest number of deaths that occur in athletes is among high school students,” he said. “The next is college.”