For years, people were told that taking a low-dose aspirin every day was a good way to ward off heart attacks and strokes. They were told that normal blood pressure was under 140/90.

But science changes, and what trickles down to patients does as well.

To cut through the changes and confusion, Dr. Carl Orringer of the University of Miami Health System gave National Press Foundation fellows the latest thinking on preventive cardiology. Orringer, who directs the system’s Preventive Cardiovascular Medicine Program, is a past president of the National Lipid Association and has contributed to or written many of the guidelines developed by the medical community to guide doctors and patients in the best preventive practices.

On aspirin, the “data are very clear,” he said. For those who have history of specific cardiovascular issues, continuing a daily aspirin regimen makes sense. That applies to those who have survived a heart attack or stroke, as well as those with stents or peripheral artery disease. 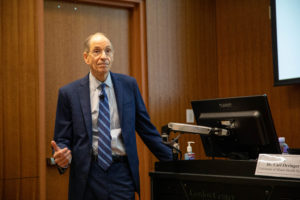 But aspirin as a purely preventive measure, he said, is not supported by the evidence: It didn’t reduce cardiovascular events but did increase bleeding episodes, leading to higher mortality rates for those otherwise healthy adults.

“It just does not seem to show benefit in primary prevention,” Orringer said.

He also led fellows through the latest thinking on diet, exercise, cholesterol and blood pressure management. Included in that are questions on the latest diets of the day.

What about the ketogenic (keto) diet? It’s not superior to other dietary approaches for weight loss, he said, but it may have advantages related to appetite control, triglyceride lowering and reduction in use of medicine for type 2 diabetes management. There is no clear evidence that it reduces blood pressure and minimal data on long-term safety.

Intermittent fasting? It could have some benefits for battling obesity, diabetes, cardiovascular and other diseases. But it’s also tough to do: It can result in hunger, irritability and a reduced ability to concentrate.