State and local officials are preparing for an outbreak of the new coronavirus disease, but years of federal and state budget cuts have weakened the public health system as a whole, said Dr. Marcus Plescia, chief medical officer for the Association of State and Territorial Health Officials (ASTHO). 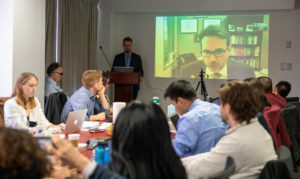 ASTHO is the national nonprofit representing the public health agencies of the United States, U.S. territories, and District of Columbia, as well as the more than 100,000 public health professionals these agencies employ.

In a videoconference from Atlanta with National Press Foundation fellows in Washington D.C., Plescia (Bio, Twitter) said state and local officials are now primarily focused on protecting those at greatest risk, namely the elderly and those with chronic health conditions. The disease has been detected in 70 locations around the world.

Though cases have occurred in more than a dozen states, the situation in the United States “is still being described as a series of cluster outbreaks,” Plescia said. “That may or probably will change to widespread community involvement.”

Plescia said that state and local officials have a great deal of experience dealing with infectious diseases and that hospitals do have – or are supposed to have – detailed emergency plans for how to handle a sudden influx of patients.

“We want to reassure the public that there is some ability and preparedness out there,” he said. “On the other hand…. a lot of resources and funding has been cut back so a lot of capability has been cut.”

Plescia said officials wants to send a balanced message. Many people who are exposed never fall ill, and the although the mortality rate now stands at about 2%, that could fall as more asymptomatic cases are discovered. However, “we want people to take this seriously” and stay home if they are asked to do so, he said.

“People really need to take responsibility. Everybody has to do their part.”

Journalists can help by fighting misinformation, urging people not to hoard or stockpile goods in advance. Everyone should keep 14 days of prescription medication on hand in case they are unexpectedly quarantined, he said.

State and local officials are also trying to convey the message to “stay home if you are sick,” but also that those who need to see a doctor should call ahead first to make sure they can be treated properly and to avoid affecting others.

There is no hard science yet on how long the virus can linger on hard surfaces, but most infectious disease can survive no more than a few hours and “we have no reason to believe this virus would be different,” Plescia said. Household disinfectant products should be effective. Frequent handwashing and avoiding touching the face are the most important precautions.