Living with heart disease is hard.

For doctors, getting their patients to live the right way can be tough as well.

In a session with National Press Foundation fellows exploring all aspects of heart health, a cardiologist from NYU Langone Health and three NYU patients talked about their heart health – and how they’re living with it.

Dr. Jennifer Chao, a clinician in cardiovascular medicine and a clinical instructor for internal medicine and cardiovascular disease at the NYU Grossman School of Medicine, talked about her own strategies for compelling patient compliance. She acknowledged it can be tough, and also said the patient-doctor relationship has changed.

“There’s been a shift from disease management to disease prevention,” Chao said.

The patients – all snowbirds who use NYU Langone Health clinics in South Florida each year – come at it from very different perspectives. 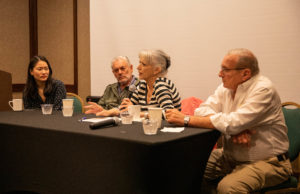 Jeanne Friedman, 68, from Queens, New York, and Boynton Beach, Florida, has essentially been a lifelong cardiac patient, undergoing a cardiac catheterization when she was just 14, to having open-heart surgery and a pacemaker in her 50s, to having mitral valve replacement in her 60s. She’s fit, follows a mostly vegetarian diet and is an extremely informed patient – able to rattle off procedures like an MD.

Barry Hartman, 73, of Oceanside, New York, and Delray Beach, Florida, talked about the coordination of care between his New York doctors and his Florida ones. Hartman, who had stents put in about 15 years ago, talked about how he has managed his diet, medications and exercise since then.

“I listen to my doctors. I also listen to myself,” he said. Several weeks before, he weighed himself and found he had drifted up to 185. “I said, ‘No, I don’t like that,’” he said. He began hitting the gym and lost seven pounds.

Jeff Honzik, 70, of Culver, Indiana, and Delray Beach, grew up with a father who was a pediatrician. But it still doesn’t mean he does what his doctors today say. Although he had a triple-bypass operation in 2001, he’s not what you would call an ideal patient. He still smokes. His diet is traditional Midwest.

“I don’t maintain any kind of balanced diet,” he said. “I eat what I eat. I’m pretty much a meat-and-potatoes man. I guess I got good faith in modern medicine.”