For Steve Sternberg, the lesson is simple: There’s safety in numbers. The more a hospital or doctor does something, the more likely they are to do it well.

Sternberg, assistant managing editor for health initiatives at U.S. News & World Report, said that has been the conclusion of some of his most penetrating reports on the American health care system.

Sternberg (bio, Twitter) has been investigating the nation’s medical system for years; among his awards is the American Heart Association’s Howard L. Lewis Achievement Award. 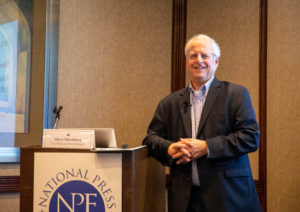 In a session with National Press Foundation fellows, Sternberg walked through some of his biggest investigations.  With stories such as “The Geography of Life and Death” in USA Today and “Risks Are High at Low-Volume Hospitals” in U.S. News, Sternberg has found that the number of procedures performed at a facility affects outcomes.

One analysis showed that as many as 11,000 deaths may have been prevented between 2010 and 2012 if patients who went to the lowest-volume fifth of the hospitals had gone to the highest-volume fifth, he wrote.

“Volume makes a difference,” he said. “For heart failure, lower-volume centers had much higher death rates.”

His 2017 investigation “Safety in Numbers” looked at heart procedures on children and found the same thing: 26% of deaths – more than 1 out of every 4 – that occur following surgery for the most severe heart defects could be prevented by having the operation performed at hospitals where surgical teams do the greatest numbers of procedures, his analysis found.