The National Heart Institute was founded in 1948, the same year as the Framingham Heart Study, the world-famous longitudinal research project that sought to understand what went on in the human heart.

At the time, little was known about the general causes of heart disease and stroke, but public health officials did know that death rates for cardiovascular disease had been rising since the early part of that century. A total of 5,209 men and women from Framingham, Massachusetts, volunteered for the project that would help change medical history. 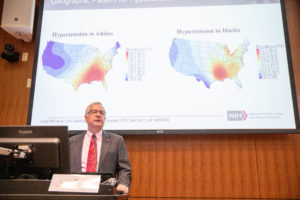 Dr. David Goff Jr., director of the Division of Cardiovascular Sciences at the institute, detailed that history for National Press Foundation fellows, emphasizing what has been learned over the past seven decades and what challenges still remain.

“We have made a lot of progress in the last seven decades,” said Goff (bio, Twitter). “But there’s been a period of stagnation, or a reversal of that progress. … We may be seeing rates go back up.”

The institute funds its own research, but most of its funds go out as grants to academic and other outside researchers. Goff detailed six pillars of the institute’s strategic plan and two of the most important: addressing social determinants of cardiovascular health and promoting cardiovascular heath across the lifespan from womb to tomb.

On the social determinants issue, Goff pointed to the “disturbing trends” in the geographic disparity of cardiovascular death, with very high death rates in the nation’s heartland.

While overall death rates have dropped, the gulf between counties with the most favorable death rates and those with the worst is huge – a four-fold difference. He showed a map of the United States, with most of the West, upper Midwest and Northeast covered in blue – favorable rates – and the South and Rust Belt covered in unfavorable red.

“We need to close the disparity gaps,” he said.