Medical devices go through a rigorous clinical trial and approval process before they can be used widely used in patients.

But what if that process sometimes misses serious long-term implications?

That was the focus of a presentation by Dr. Joanna Chickwe, professor and chair of cardiac surgery at the Smidt Heart Institute at Cedars-Sinai Medical Center. For National Press Foundation fellows, she detailed the experiences of some devices that show favorable results early in a clinical trial but unfavorable ones later. 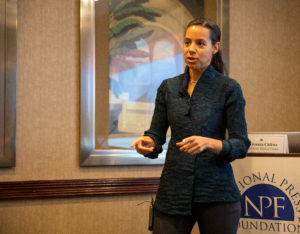 One example is the MitraClip, used to repair a leaky mitral valve. Two different trials were at odds – one favorable, one not.

One explanation is that clinical trials are funded by industry firms with a vested interest in success, Chikwe said, noting that industry-sponsored trials have more favorable efficacy results and more favorable conclusions.

She also detailed the many ways that randomized clinical trials – generally the gold standard of medical evidence – can be biased, as well as why prestigious medical journals sometimes publish flawed studies. Among the reasons is that journals get revenue from reprints of those favorable studies.