It’s a question the U.S. Supreme Court took up in 2017, and it could have a big impact on who controls statehouses and the U.S. House of Representatives.

In a session with Paul Miller fellows, Michael Li of the Brennan Center at the New York University School of Law gave an overview of “gerrymandering” – the practice of manipulating the boundaries of legislative or congressional districts to favor one party or class of voters.

Gerrymandering has been a feature of U.S. electoral politics from the earliest days of the nation’s history. (The name combines “salamander” and Massachusetts Gov. Elbridge “Gerry,” who in 1812 signed a redistricting plan that benefitted his political party.) It’s also been used to give minority voters more of a say in elections by grouping African-American or Latino voters into a single district, rather than spreading them into several districts and thus diluting their voices.

The issue is hot now because Democrats say that Republican state legislatures after the 2010 census used sophisticated computer programs to draw such intricate district boundaries that Republicans were able to dominate statehouses and congressional delegations even though they didn’t dominate voting rolls.

Li led fellows though a description of the challenges the U.S. Census Bureau will face in 2020, given its budget constraints. That census will determine how many members of the U.S. House each state will get. That, in turn, will lead to the drawing of new congressional boundaries. Right now, projections show that six states could gain House members and eight could lose them.

Li described how drawing those boundaries is left to the states and their different standards for how “compact” or “contiguous” the districts need to be, or whether they need to respect city and county boundaries.

He also discussed the “efficiency gap.” That’s a measure used to determine if partisan gerrymandering has led to unfair representation in Congress – such as when politically balanced states are nontheless dominated by one party. 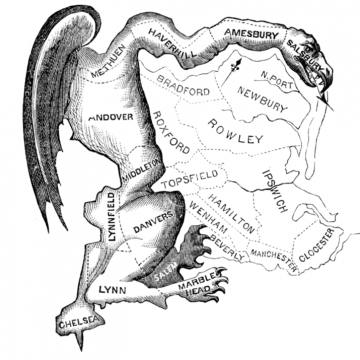