It’s a common refrain to hear that Congress – and therefore the country in general – is more polarized than it has been in years. But what does that really mean?

And, perhaps more importantly, what does it mean for the ability of Congress to get anything done?

In a session with National Press Foundation Paul Miller fellows, political scientist Sarah Binder detailed the partisanship and polarization that have put a stranglehold on congressional action.

Binder (bio, Twitter), of the Brookings Institution and George Washington University, showed how party polarization was at high levels at the turn of last century but then dropped until the 1950s, when it started rising again. It’s made major jumps in the past decade.

The U.S. House has generally outpaced the U.S. Senate in polarization, although the chambers generally move in tandem. Binder’s polarization measure illustrates how often Democrats are voting with Democrats and Republicans with Republicans. Plotted with blue and red dots, there are very few Democrats or Republicans who stray from the tightly bunched dots showing their political comrades.

“Except for Susan Collins hanging out over here,” she said, pointing to a red dot for the Republican senator from Maine, “there really isn’t anybody in the middle.”

That’s not likely to change soon.

Given that re-election is always the goal of legislators – and that the parties remain polarized and competitive – the institutional barriers in the House and Senate will make it difficult for the two sides to compromise.

In general, bipartisan deals are possible when both parties judge the cost of saying “no” as being too steep. But in recent years, that hasn’t happened very often. 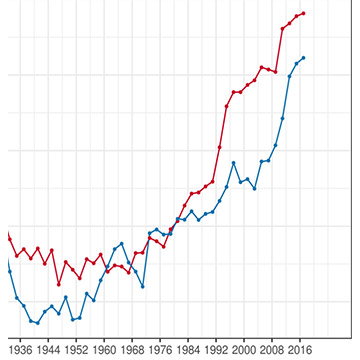 This content is sponsored by the Walter and Karla Goldschmidt Foundation