If you want to go into podcasting, those are some of the things you’ll want to figure out. With podcasting, journalists are asking enter their listeners’ lives in a fairly informal, almost intimate, way. But they must fit it to their schedules.

Those are some of the lessons passed on by Ron Elving, a veteran at NPR and a lecturer and executive-in-residence at American University, who shared his insights on podcasting with Paul Miller fellows.

For Elving (bio, Twitter), the podcast is the latest manifestation of what he called the “arc of audio” – from AM radio to TV to FM to podcasts on smartphones and other devices. The human voice is so expressive that it allowed radio to become the most personal medium, Elving said. The same applies to podcasts.

But while building a radio station costs quite a bit of money, building a podcast requires … a good microphone and GarageBand. Oh, and an inspired idea – and that might be the hardest thing to come by.

Elving has been involved with podcasts since 2006, including “It’s All Politics” and “NPR Politics Podcast.” It’s the why that is perhaps most important, given some 550,000 active podcasts are available from Apple’s podcast platform. “That’s a lot of audio vying for your ears and your time,” he said.

Do you have an existing platform – an established news organization, perhaps – that can help launch your podcast? Do you have something unique to say? Important expertise listeners can’t get anywhere else?

And what’s your goal? Making money? Promoting an existing brand? Contributing to the dialog? Sharing an important message? Any of those can be valid, but the podcaster should know the answer before they start.

“It’s hard to make money on podcasting,” Elving said, “but it is easier to get in the conversation.”

That said, it’s a “huge time suck,” he said. While the technology required is minimal, the time necessary to do it right isn’t.

Elving talked through some of the technological requirements, including some ideas on how long podcasts should be. That’s why NPR was researching average gym and commute times, since that’s often when people listen to podcasts. 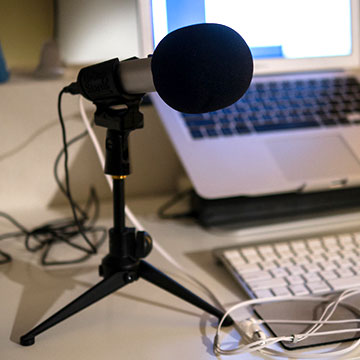