To be a complete reporter these days requires multimedia skills. And while some reporters consider learning those new tools to be daunting, it doesn’t have to be: That little device you carry in your pocket and free online sites give you the power to do much of what used to be the purview of staff photographers and designers.

In sessions with Paul Miller fellows, Graham Cullen and Adam Marton went over the basics of taking good photos with a smartphone and making simple graphics that are good enough to use online.

Cullen, director of multimedia at The Frederick (Maryland) News-Post who also teaches at the University of Maryland, led fellows through the do’s and don’ts of visuals on the go.

For photo and video, reporters have with their smartphones a device that allows them to create high-quality images. But to get the most of those devices, journalists need to understand the phones’ limitations.

Among his suggestions for taking simple portraits, a staple of many stories:

Marton, who spent 13 years at The Baltimore Sun and now teaches at the University of Maryland, led fellows through the basics of creating graphics using platforms on the web (most have free versions for light or moderate users).

Among his suggested sites: Infogram, ChartBlocks and Datawrapper. He singled out Infogram as having good templates and embedding features, as well as for being responsive on both web and mobile platforms.

He also pointed fellows to Google Fusion Tables, which has easy-to-use mapping features, allowing journalists to take a long list of address or other coordinates and instantly plot them on a map.

Before starting the process of creating a graphic, however, Marton said reporters need to focus on what they what the graphic to say. Throwing a bunch of data into a graphic creates a mess, not clarity.

“What’s the nut graf – what are we trying to say with this graphic?” he said. “When we are creating graphics, we have a point in mind and are trying to tell a story.” 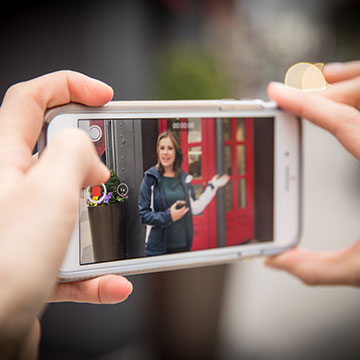