With federal spending topping $3.5 trillion a year, most of the focus by journalists is on what the federal government does in Washington. But what’s going on in Washington has a deep impact on states as well.

Nationwide, federal spending is equivalent to 19 percent of gross domestic product of the states. But there’s a pretty big range in that, going from a low of 12.5 percent in Wyoming to a high of 32.9 percent in Mississippi.

That means what happens in Washington can have a major impact on a state’s fiscal health.

“The national story is a state story,” said Barb Rosewicz, director of the Fiscal 50 project at The Pew Charitable Trusts, a Washington-based policy research organization. Rosewicz and her colleague Anne Stauffer, director of Pew’s fiscal federalism initiative, described the interplay of federal and state dollars during a session with National Press Foundation fellows.

Pew offers several resources for reporters to explore the interplay between Washington spending and state economies. Reporters can, for example, track the plunge in state tax revenue during the Great Recession – and how some states have come back but others haven’t.

Among the Pew resources: 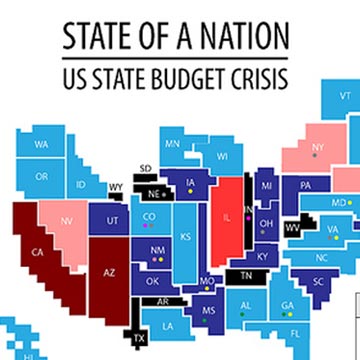