Washington is awash in money, and reporters who cover campaign finance are awash in data about it.

Learning how to sift through and make sense of those billions of data points is the key challenge of the beat.

In a session with Paul Miller fellows, four journalists on the beat described how they execute their stories – and why they aim for stories that illustrate the nexus between politics and policy.

Matea Gold, national political enterprise and investigations editor at The Washington Post and before that a long-time money and politics reporter, said it is one of the best beats in town. But it’s also a crowded one that requires a level of expertise and sophistication in executing data-heavy stories and properly framing the big-picture themes represented by all that money.

Gold detailed the change in finance tactics since 2010. During that time, three U.S. Supreme Court cases paved the way for the development of super PACS and the loosening of other restrictions on how much people can contribute.

“The last seven years have been about the rush of wealthy donors back into our political system in a big way,” she said.

She advised reporters to start to explore why those folks are so interested in giving away their money. “In the end, we have to show readers why that matters – what are they getting for their money?” she asked.

One other tip: Don’t hesitate to call.

“Billionaires might not call you back, but millionaires definitely will,” Gold said. “It’s remarkable how many people will talk to you.”

Fredreka Schouten, a campaign finance reporter for USA Today and a Paul Miller alum, detailed the ways she was able to document the connections between big-money donors and candidates. That included a story that mined a public website that golfers use to track their handicaps to find people who are members of Trump’s private golf clubs – and therefore in a better position to have the president’s ear.

One tip from her: Be prepared to build your own database if what you want doesn’t exist. Such databases are often not complex but are often voluminous. “It’s a lot of grunt work,” she said. “Sometimes it’s three weeks of typing.”

Julie Bykowicz, a national political reporter for The Wall Street Journal, led fellows through an explanation of how she manages the mountain of information that comes in on a Federal Election Commission filing deadline.

That first night, you need to have the framework of a story in mind to allow you to make sense of the data from multiple candidates and committees.

“If you can get that first story out of the way, it clears your headspace,” she said. After that, you can move on to the deeper dives on specific issues or themes.

Finally, Michael Beckel – a Paul Miller alum who is now the manager of research, investigations and policy analysis for the advocacy organization Issue One –  gave a tutorial on how to navigate the FEC website to download and analyze campaign contributions and spending data.

In 2017, the FEC created a new website, which Beckel said has made it very easy to download data. (For reporters still partial to the old website – or prefer some of its functions – it was still functional well past the introduction of the new one.)

Beckel also provided a detailed tip sheet with more than two dozen questions reporters should ask as they set out to track politicians and money. (Examples: How much of their itemized receipts came from in-state donors vs. out-of-state donors? Who are the notable donors who gave money? Did any lobbyists bundle money for this politician?) 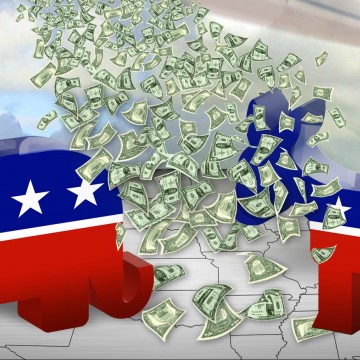