For reporters looking to unearth government secrets, the Freedom of Information Act is an indispensable resource.

“FOIA is the unsung hero of journalism,” said Adam Marshall, the Knight Foundation litigation attorney at the Reporters Committee for Freedom of the Press. “It really is an incredible tool.”

Marshall (bio, Twitter) gave Paul Miller fellows a step-by-step tutorial on filing a FOIA request and provided tips on how to maximize their chances of success. He highlighted the distinction between a “targeted request” (asking an agency for something specific that already exists) and an “exploratory request” (asking for records about a subject in hopes something interesting comes up).

Marshall also identified the three essential requirements of any FOIA request: It must be written, it must “reasonably describe” the records sought and it must follow agency regulations. He suggested providing as much detail as possible – even specifying places for the agency to search. And he advised against using broad phrasing such as “all documents pertaining to, relating to, or concerning”; instead, reporters should include keyword searches so that the agency doesn’t take the liberty of inserting its own keywords.

For the most up-to-date rules and regulations, Marshall recommended that reporters consult an agency’s website for its FOIA guidance, rather than referring to more general FOIA regulations.

Although the agency is technically required to make a determination within 20 business days, Marshall noted that these parameters are rarely followed. To speed the process along, he suggested contacting the agency’s public liaison or chief FOIA officer after a request is filed. Often, negotiating with that person to shape the scope of the request may lead to a faster response.

If a FOIA request produces partial or no information, a journalist can appeal; if that also fails to yield results, they can go to court. Marshall said FOIA lawsuits jumped 26 percent from 2016 to 2017 – and added, “This trend is likely to continue.”

One strategy to sidestep seemingly interminable wait times is to file a state rather than federal request.

“Nine times out of 10, it’s going to be much faster and more helpful,” Marshall said. One drawback, though: Rules and regulations are often less articulated at the state level.

Marshall underscored the importance of consulting editors and in-house counsel at each step of the process. Beyond that, document everything; this proves especially useful during a potential appeals process. 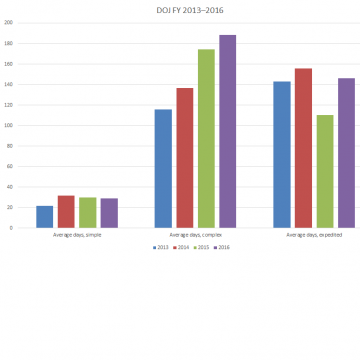