Seymour Hersh’s career has been one of taking risks, working hard – and never, ever giving up.

That’s what came through when Hersh spoke with Paul Miller fellows at the National Press Foundation. One of the most successful reporters of his generation and those that followed, Hersh broke some of the biggest stories of the past half century – stories dealing with the Vietnam and Iraq wars, Watergate and the Nixon White House, and a range of national security abuses.

His work has not been without controversy, including his reporting on the circumstances surrounding the death of Osama bin Laden; that reporting, which said much of the official U.S. story on the killing is wrong, was strongly contested by other journalists and national security experts (a recap of the dust-up here).

But Hersh has been second-guessed before – and then been proven right in the long run. His work at The Associated Press, The New York Times, The New Yorker and as an author has won the top awards in the business, including the Pulitzer Prize, five George Polk awards, two National Magazine Awards and many others.

His session with Paul Miller fellows came a day before “Reporter: A Memoir” (publisher, Amazon, Barnes and Noble) hit book stores. It recounts his life, starting with his lower-middle-class immigrant family upbringing in the South Side of Chicago.

He was a risk-taker as a young man – starting a newspaper, for example – and over his career he also took great risks in the stories he selected. He wasn’t much of a team player, he says, but he was dogged: “It was a trait I learned from my father; the only way to work was hard,” he writes in “Reporter.”

Among his tips for Paul Millers:

__“Read before you write,” he said – meaning don’t go into any interview or story unprepared. “There’s no reason not to know everything about them before you call,” he said.

__Never forget the story. “Even daily journalism is narrative,” he said.

__Make sure a story is as long as it needs to be – but no more and no less. As he was told by the legendary editor for The New Yorker, William Shawn, as he apologized for sending in a 12,000-word story: “Oh, Mr. Hersh, stories are never too long or too short. They’re too interesting or too boring.” 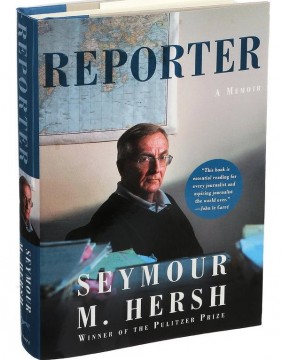