A key geopolitical challenge akin to a toy puzzle?

For Jenny Town, a research analyst at the Stimson Center and the managing editor and producer of the website 38 North, the decades-long standoff with North Korea reminds her of a Rubik’s Cube.

“It’s not that nobody can solve a Rubik’s Cube,” said Town (bio, Twitter). “It is solvable. But you put it down for a while, say you’ll try later, say you have better things to do.”

The ongoing efforts by the U.S. and other world powers to limit the development of North Korea’s nuclear arsenal have taken a radical turn during the administration of President Donald Trump, who has alternated between browbeating and sweet-talking Kim Jong-un, the Asian country’s dictator. For the most part, the efforts – as of early 2019 – have not substantially altered the threat of a nuclear-armed North Korea.

In a session with Paul Miller fellows, Town detailed the efforts over time to rein in North Korea and explained why they have, for the most part, failed.

“There tends to be this common narrative: We’ve had 25 years of negotiations and no resolution,” she said. “Why is this time going to be any different?”

However, she added, there have been some successes. And so, like that Rubik’s Cube, the problem is solvable.

Town was joined by two Stimson colleagues to discuss other geopolitical hotspots. Stimson has a staff of experts on a range of global issues, most of them happy to share their knowledge with reporters.

Stimson co-founder Barry Blechman detailed the current stalemate with Russia, including Russia’s efforts in the past decade to bolster its military and undertake aggressive actions in the region. Blechman also put Russian military power in context, noting that despite complaints by some in Washington, “the U.S. remains superior conventionally.”

Distinguished fellow Victoria Holt detailed the role of the United Nations in helping mitigate conflicts worldwide – often in places that are outside the news. “You need both peace operations that can literally protect civilians and support for the rule of law,” Holt said.

She also talked about how journalists can tap into the network of diplomats worldwide. “It’s all relationships,” she said. “People will talk to you, but it’s a matter of trust.” 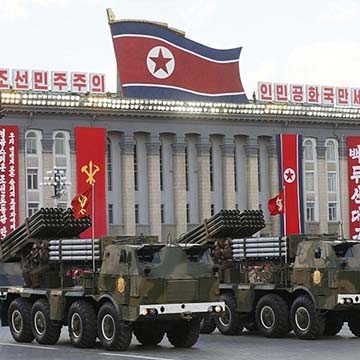 This content is sponsored by the Walter and Karla Goldschmidt Foundation.