It’s been four decades since the last contested presidential nominating convention. Will the Republican National Convention in Cleveland really become a brawl over delegates and rules?

“This could be the most remarkable political event of our lives,” said Stephen Ohlemacher, veteran delegate counter for The Associated Press.

Ohlemacher and several other journalists offered tips, resources and predictions for the presidential nominating conventions this summer – with the Republicans meeting in Cleveland July 18-21 and the Democrats in Philadelphia July 25-28.

If Republican front-runner Donald Trump doesn’t have enough delegates to win on the first ballot, the convention could erupt in a free-for-all. That’s why the selection of delegates, and the rules governing them, is so important this year. To complicate things, the process varies from state to state.

Some delegate and rules resources:

Journalists should get to know delegates well in advance of the conventions, making sure to collect their cell phone numbers, email addresses and social media contact information. If the convention goes beyond the first ballot – when delegates will be released from their pledged support – the ability to reach delegates will become critical. Party power brokers will also take on outsized influence if no candidate can amass the necessary 1,237 delegates to clinch the GOP nomination. (The Democratic nomination requires 2,383.)

Beyond delegates and rules, convention advice for journalists followed these lines:

Logistics. Over and over, experienced reporters emphasized the need to line up logistics in advance, from hotel rooms to reliable transportation to/from the convention hall, to allowing extra time to pass through tight security. Credentialing for journalists is being handled this year by the House Press Gallery. Contacts  include Annie Tin (annie.tin@mail.house.gov) and Laura Reed (laura.reed@mail.house.gov).

Preparedness. From comfortable shoes to well-stocked backpacks (extra batteries, Wi-Fi booster, digital recorder, energy bars, notebooks and pens), reporters stressed being prepared for long waits and surprises. Reporters should do a lot of advance reporting and write b-matter for stories before the convention begins.

Story Ideas. Reporters offered an abundance of reporting suggestions. Go to the delegate breakfasts. Schmooze the state elected officials who you’ll need in the fall campaign. Pay attention to the party platforms. Look for interesting angles in the convention city that others won’t write. Troll social media for what’s resonating with people. Look for that distinctive detail that will set your story apart from the 9,999 other stories written from the convention. Try to write for the audience watching from home as the conventions unfold. Follow the money as lobbyists and corporations throw fancy fundraising parties for politicians.

For first-time convention goers, Tracie Mauriello of the Pittsburgh Post-Gazette offered a guide of sorts with the blog she wrote in 2012 for the National Press Foundation. It is chock-full of advice.

John Mulligan, longtime Providence Journal reporter and now Senate Press Gallery staff, described the conventions this way: “Convention is Prom Night. After romancing campaigns forever, it's your moment in the spotlight for your sources, bosses and biggest readership of the cycle. Better be looking and dancing your best.” 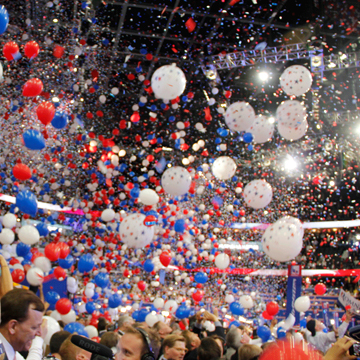 Funding for this content was provided by CQ Roll Call and the Indiana University Center on Representative Government.