In 35 years of wandering the halls of Congress, David Lightman has learned the most valuable lesson of all: Ask.

If you see a senator and don’t know who he or she is, ask. If you don’t know where to go for a stakeout, ask a veteran reporter.

“If you see a congressman and you don’t know who they are but 10 reporters run after them, join in,” he said. “Ask why later.”

In a session with Paul Miller fellows from the National Press Foundation, Lightman – a national political correspondent for the McClatchy Washington Bureau – detailed the nitty-gritty of how to find people and things in the U.S. Capitol. It is virtually the last place in official Washington where a reporter can wander the halls; that doesn’t happen in the Pentagon or White House anymore, and it doesn’t happen in other departments or agencies.

In the Capitol and its related House and Senate office buildings, a reporter can still button-hole a senator or representative in the hallway. That also means it’s the only place in town where a reporter can get both sides of a  story. But reporters have to get over any reticence they may have. Bottom line: Get in the scrum and ask.

__Learn the stakeout spots in the Capitol. They include the Speaker’s Lobby; hallways by members-only elevators; the hallway outside weekly caucus lunches; and the steps by the stop for Capitol Hill’s small subway system.

__Learn how to put in notes or cards to request that a member or senator come out from the Senate or House chamber to one of those stakeout spots for an interview. While sometimes such a request will result in a call from the politician’s public relations person, many members and senators do step out for the requested interview. “They appreciate that you are out here,” Lightman said.

__Record everything. “These are people who know how to talk to reporters – and know how to parse things,” Lightman said.

__Learn what’s behind some of the many unmarked doors in the Capitol. In one case, it’s the Senate majority leader’s press operation.

__Finally: Realize that the Capitol is one of the last places in town with a dress code. Women can’t bare their shoulders in certain areas; hats aren’t allowed in the chambers. Dress codes can be found at the various press galleries that represent daily, periodical and broadcast reporters. 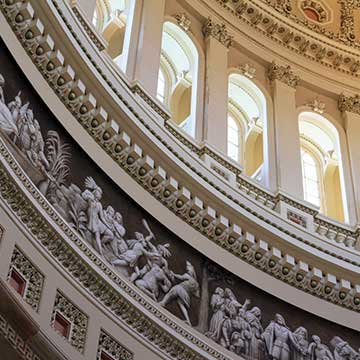