From the minute he walks into the White House, Donald Trump will have an array of powers at his disposal.

It will allow him to stop or reverse many of the initiatives President Barack Obama put in place by dint of the executive powers that reside in the Oval Office. That’s independent of what happens in Congress – even though this Congress is expected to be generally friendly to Trump.

In a National Press Foundation panel discussion, Susan Dudley, an expert on regulatory power, detailed the ways Trump can quickly execute parts of his agenda. Dudley is a former regulatory official in the President George W. Bush administration who now directs the Regulatory Studies Center at George Washington University.

Among those powers: stopping Obama regulations in their tracks, if they haven’t yet been published in the Federal Register; using the Congressional Review Act to undo regulations finalized in the last several months of Obama’s tenure; not defending rules that opponents have sued to stop; and handing off implementation of Obama rules to states that have little interest in implementing them. (A full range of these options explained here.)

Reporters who have covered Obama’s use of executive powers point out that what goes around comes around. Tim Mak, a senior correspondent for The Daily Beast, discussed his article after the election that “Obama’s imperial presidency is now Trump’s.” And Gregory Korte, a White House correspondent for USA Today who previously wrote on Obama’s aggressive use of some executive powers, reminded reporters of what Sen. Ted Cruz, a Texas Republican, said: “If you live by the pen, you die by the pen.”

Finally, Tom Hamburger, an investigative reporter for The Washington Post who has aggressively tracked Trump’s business empire, noted another aspect of the incoming president’s powers: The ability to impact his own financial holdings by what he says or does in the Oval Office.

While much of Trump’s empire remains opaque, resources to begin investigating it include the Office of Government Ethics, which lays out rules for disclosure and for avoiding conflicts; Trump’s personal financial statement, which lists the hundreds of companies he controls worldwide; and a Congressional Research Service report on what the law says about whether a president has to divest his business holdings. 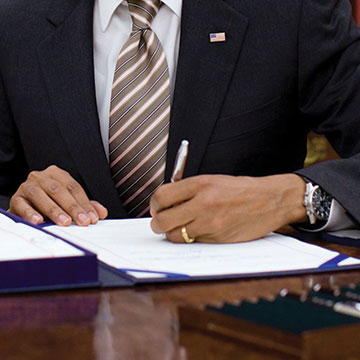 The National Press Foundation’s partners for this briefing are CQ Roll Call and the University of Maryland Philip Merrill College of Journalism.