The budget in Washington isn’t just a Beltway matter.

As reporters set out to explain massive numbers that make up the U.S. budget, deficit and national debt, they need to keep that in mind. True, much of the budget battles revolve around just that – the battles, conflicts, partisan bickering. But reporters need to keep the budget in context, and also explain who is impacted when Washington passes its annual budget.

In a session with Paul Miller fellows, two Politico editors led journalists through an explanation of big-picture budget and debt issues, helping them zero in the stories to cover and resources they can use.

Sudeep Reddy (bio, Twitter), a former Paul Miller fellow who is managing editor of Politico, and Ben Weyl (bio, Twitter), who oversees congressional coverage at the news organization, talked nuts-and-bolts of who can help reporters understand the budget and related debt and deficit issues.

Reddy pointed fellows to a famous quip by Peter Fisher, a former undersecretary of the U.S. Treasury Department, that the government is really “an insurance company with an army.” The largest share of the budget goes to mandatory Social Security and health care programs; the military then takes a large chunk. Everything else – veterans programs, education, environment, energy, transportation, housing, among many others – only get about a quarter of annual spending.

Reddy counseled journalists to remember the audiences beyond Washington, including individuals, businesses whose fortunes are shaped by policy actions, nonprofits, financial markets and foreign actors. “We tend to aggregate everybody into a group of ‘taxpayers,’ ” Reddy said. But each of those audiences is affected in very different ways by the budget.

Weyl led fellows through the budget calendar – at least how it is supposed to work – and described the roles of the White House and the appropriations committees in the U.S. House and U.S. Senate.

He also explained the process of reconciliation, which refers to a budget bill that cannot be filibustered in the Senate. 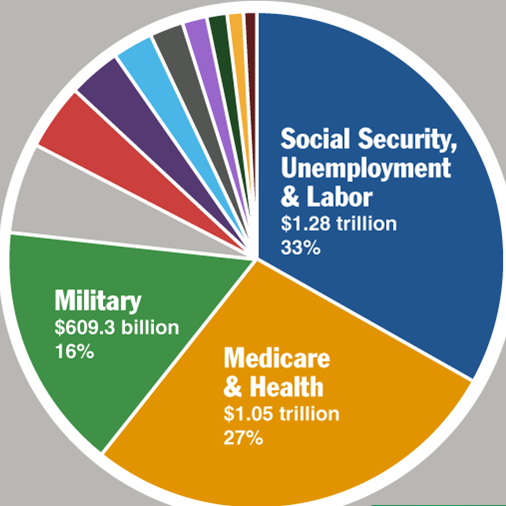