So what are reporters to do when they wake up one day and all their sources are gone?

For White House reporters, a version of that happens every four or eight years. But when administrations turn over – whether staying within the same party or making a switch – there are strategies reporters can employ to stay on top of the news and to rebuild their source lists in the new administration.

In a briefing sponsored by the National Press Foundation, reporters experienced in the transition process offered strategies and tips on what to do.

As Jackie Calmes, a national correspondent for The New York Times and a veteran of transitions back to the turnover from President George H.W. Bush to President Bill Clinton, noted: “You don’t report a transition in the transition. You report it months ahead of time.”

In her own case, Calmes said, that meant notes she had collected well before the transition suddenly became relevant when Clinton named his treasury secretary; that day, Calmes was in the hospital for the birth of her second child, but was able to phone in her notes anyway. “I got a joint byline on that one,” she quipped.

Other panelists were: Kimberly Hefling, senior education writer at Politico, who talked about how to report on transitions at the department and agency level; Olivier Knox, chief Washington correspondent for Yahoo News, who talked about how to work stories about an incoming administration that will likely exhibit some level of hostility to the press; and Margaret Talev, senior White House correspondent for Bloomberg, who told reporters to remember what actually drives the exchanges of information between the press and the White House.

“It’s transactional,” she said. “It’s not personal. It’s hierarchical.” Access is great if you have it, Talev said – and it does help reporters from the biggest news organizations get scoops. But reporters can get plenty of stories without such access, by working sources on Capitol Hill or advocates who are knowledgeable about what the White House is up to.

Knox noted another vital strategy for source-building and maintenance: “Today’s deputy press secretary is tomorrow’s press secretary,” he said. “Some of my best sources today were in junior roles before.” Befriend those people now, he said.

Both Talev and Knox are officers or board members of the White House Correspondents’ Association, whose leaders have recently spoken out about how the 2016 presidential campaigns have treated reporters – and how that could offer insight into how those administrations might operate.

The discussion was moderated by Catalina Camia, a policy editor for CQ Roll Call. 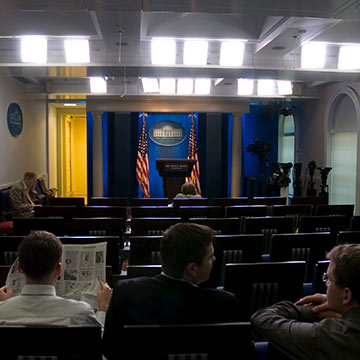