Through major upheavals in civil rights, women’s rights and gay rights; vital cases such as the contested 2000 presidential election and decisions on campaign finance rules; and major nomination battles – Denniston has been there.

Denniston (blog, Twitter) has covered a quarter of all the justices who have sat on the court and retains an encyclopedic knowledge of cases going back decades – as well as concrete tips on how to cover what is a slow-moving, tradition-bound institution.

Some of his lessons from the beat:

He was joined by Amy Howe, a former editor and current contributor to the influential legal website SCOTUSblog. Howe (blog, Twitter) gave reporters an overview of how reporters can actually cover arguments or decisions at the court, even if it’s not their main beat.

Howe talked about practical steps journalists dropping in on the court for occasional stories need to take before the day of the case, the day of the session, or afterwards. (Her thoughts were also distilled in a blog post and video in 2015.)

The suggestions are as simple as they are obvious: “The day of the argument, you want to show up early. They are very firm on this. They are polite, but very firm. You may have 50 to 100 people competing for a couple dozen seats.”

She said you may end up sitting there a while; during that waiting time, Howe said reporters scan the courtroom audience to see what famous people showed up (biggest score in recent years: Lin-Manuel Miranda).

Also: “You don’t get to take much into the building,” she said. “Pen, glasses, steno pad. There are no phones, there are no laptops. They will not let you wear your Apple Watch.”

Fellows also heard from Jessica Gresko, a reporter for The Associated Press who covers the Supreme Court and has also covered other federal courts.

Gresko (Twitter) led fellows through a description of various District of Columbia and Virginia federal courthouses and the different rules they have – such as on whether phones are allowed inside.

She also reminded reporters of one of the most important things reporters can ask their legal sources: “I’m not a lawyer, can you explain?”

Finally, Gresko talked about how reporters can get court documents from the PACER legal records system, even if on a tight or nonexistent budget. 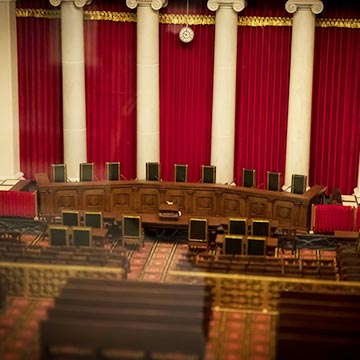