One of the rare points of agreement between Republicans and Democrats is the need to fix the nation’s roads, bridges and power grid. But how to pay for it?

Beth Osborne, a senior policy adviser with the think tank Transportation for America, led NPF Paul Miller fellows though a description of the nation’s infrastructure woes, from the safety of roads to the cost of expanding or fixing them.

She also discussed the plans of Donald Trump to boost infrastructure spending though tax credits and other public-private partnerships. How those partnerships might work is uncertain, and Congress has its own wish-list for transportation spending.

Osborne is a former official with the U.S. Department of Transportation and said the U.S. needs to reassess how it awards road money to state and local governments. Right now, too much spending is dedicated to building roads that might reduce rush-hour congestion – but sit empty other times of the day. Meanwhile, mass transit programs languish, she said.

In addition to several federal resources, Osborne pointed reporters to work by her organization that documents substandard bridges around the country, and a report card done by the American Society of Civil Engineers that gives details down to the state level on bridges, roads, ports and other elements of the nation’s infrastructure.

And she pointed reporters to one of the best assessments of the interplay between politics and infrastructure: author Robert A. Caro’s “The Power Broker.” It details the life of urban planner Robert Moses, who helped build the modern New York metropolitan area. 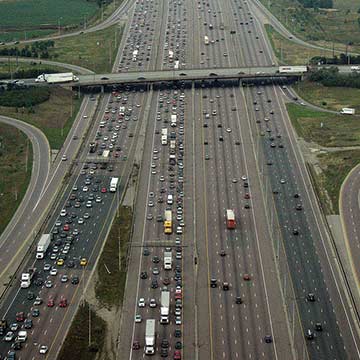