In an era of tweets and instant commentary, veteran investigative journalist Bob Woodward reminded journalists about the importance of the long view of history.

Woodward was the winner of the National Press Foundation’s W.M. Kiplinger Distinguished Contributions to Journalism Award, one of nine awards recognized Thursday night. 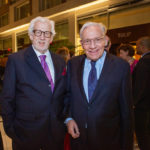 Woodward spellbound the audience with a story about his many conversations with former President Gerald Ford about Ford’s pardon of vanquished President Richard Nixon in the wrenching aftermath of Watergate. Woodward said he had assumed, as did many, that there was corruption behind the pardon—a deal in which Ford would gain the presidency in exchange for pardoning Nixon.

“We’re sitting, tape recorder on the desk for history, and I ask, again, ‘Why did you pardon Nixon?'” Woodward said. Ford said it was in the best interest of the nation so Americans could heal, and Woodward said he finally realized what courage it took for Ford to do so.

The lesson: There is always more reporting to do and journalists should never “jump to the conclusion of the moment.”

The hard work of journalism was illustrated by every NPF award winner. A sampling:

Dana Bash, winner of the Sol Taishoff Award for Excellence in Broadcast Journalism, said she is routinely stopped by strangers who thank her for her work. 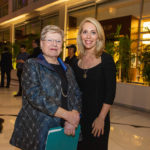 “For me, when it first started it was a little bit jarring. I thought – it’s not like I’m an emergency room doc or a firefighter. I’m not saving lives or anything. I’m just a person on TV who reports the news,” she said. “But as time has gone on – as these times have gone on – I realized people get it. They get what journalism means.”

Another high note of the evening was the Chairman’s Citation given to Charles Sennott and Steven Waldman, veteran journalists who founded Report for America—a riff on Teach for America—to help fill the depleted ranks of local reporters. Waldman said, “What we need to solve the crisis in local journalism is more local journalists. We have 59 embedded in local newsrooms right now, and will have 250 in the field in June. And, if we can raise enough money, we’ll be placing 1,000 in 2024.”

Miami Herald editor Mindy Marques received the Benjamin C. Bradlee Editor of the Year Award on the day that her newspaper group, McClatchy, filed for bankruptcy. Noting that newspapers are in “the fight of our lives,” Marques took heart from the “special kind of courage to do what we do.” At the Herald, that has meant bringing wealthy pedophile Jeffrey Epstein to justice; detailing a decade of abuse in Florida’s juvenile justice system; and disclosing how President Donald Trump has become a favorite target of a little-known Chinese industry peddling access to the rich and powerful.

Christina Jewett of Kaiser Health News won the Feddie Reporting Award for stories that forced the Food and Drug Administration to disclose a secret database of 5.7 million flawed medical devices. She cited “the power of a free press” to expose wrongdoing.

NPF’s Innovative Storytelling Award went to a collaboration of NPR and students at the University of Maryland Howard Center for Investigative Journalism that used pioneering data analysis techniques to document how many of America’s poorest communities are also the hottest. As center director Kathy Best described the work, “Students … hit the hot, sticky streets of Baltimore to gather facts, install heat sensors, take photos and video, analyze data and turn all of that into dynamic digital storytelling.” 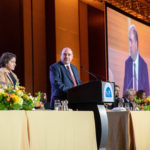 A team of Associated Press reporters won the first-ever Hinrich Foundation Award for Distinguished Reporting on Trade. Reporter Paul Wiseman said AP looks for angles that provide context to the trade wars. “We compared China today to the young United States—both dens of intellectual thievery. We looked at how businesses were responding to Trump’s tariffs—by shifting out of China, by laying low, sometimes by cheating. And we looked at the trade spats that seemed to fly under the radar, disputes over Turkish cherry tarts and rubber bands from Thailand.”

Michael Kruse of Politico received the Everett McKinley Dirksen Award for Distinguished Reporting of Congress. Kruse’s reporting focused on a freshman lawmaker, Rep. Mickie Sherrill, and followed the arc of moderate Democrats’ shift toward impeachment. Kruse said he is grateful to work at Politico, “an institution with the might and the nerve to do ambitious, important work—a place that lets me, makes me, keep trying to get better.”